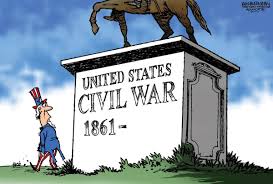 Don’t think for a moment that it’s over. Don’t give in to the sunny notion that the January 6th sacking of the Capitol building was a one-off that shocked Americans into a rejection of our former “president’s” story line about a rigged election and his own victimization. It did not. If you are truly aware of the extreme danger, you cannot turn a blind eye to America’s continuing flirtation with demagoguery and authoritarian government.
You can already see his minions providing the air-brushing, the photo-shopping of his words and actions in the weeks following the Capitol assault on January 6. Senator Ron Johnson of Wisconsin wants you to know that the violent attack was “completely unforeseeable,” and that it was not an armed riot at all. He didn’t specify exactly what it was, but given enough time he’s got the chops to transform it into a vigorous policy discussion featuring Earl Grey tea and cucumber sandwiches.
And then there’s Lindsay Graham, the senator who owes a huge debt to the elite surgeons who managed to remove his actual spine and replace it with a remarkably durable iteration of Jello pudding—vanilla, naturally–giving him maximum flexibility in these trying times. After the Capitol attack, he was quoted as saying “Count me out” when it came to supporting our former “president” any further, yet just last week he informed us he would be heading to Mar-a-Elba for a few rounds of golf, a bit of strategizing, and some tips on hair care. His reasoning was as practical as it was frightening, saying that the former “president” is “the most vibrant force in the Republican Party.” The idea being that we shouldn’t worry about the health of the republic too much, but rather about how they can win elections–at any cost. The problem is: I can make you a cocktail in which the most vibrant force is chlorine bleach, though I cannot, unfortunately, guarantee your survival should you drink it.
And all this unseemly groveling by legislators, what’s driving it? Polls, of course. The voices of the great mob, those who swallowed every ounce of the chlorine bleach offered by the former “president,” are making themselves heard. They are telling us they are indeed angry, that they still believe the election was rigged and that their champion was cheated. They believe the Biden administration is illegitimate and that something must be done about it.
Now, you will hear people pooh-poohing the danger, too. They will say there’s no way that the 74 million who voted for the “president” are in favor of a government overthrow. They’re right, of course. Many of them might still believe the election was rigged, but are willing to accept the result–for now. But how many are angry and violent enough to act on their conviction that the former “president” should be re-instated in office? A million? Five hundred thousand? It wouldn’t take nearly so many to bring to life the words of one man who participated in the attack on the 6th: “Next time we come with 30,000 weapons.” Or the one who texted, “Burn D.C. to the FKG ground.”
It doesn’t take much acumen to realize that a large number of people are listening very carefully to the former “president,” to what he has and has not said. The headline is: he did not actually CONCEDE the election. As recently as last week he stuck to his story about a rigged election, and is expected to do so again at the conservative gathering CPAC on February 28. He insisted on the 6th that “We will never give up, we will never concede. It doesn’t happen. You don’t concede when there’s theft involved.” And his statement the following day, meant to mollify critics, was no retraction at all. He delivered it in that special wooden monotone, under a kind of teleprompter hypnosis that communicates to his mob his lack of enthusiasm. Again without actually conceding, he said that Congress had certified the election results, and that a new administration would be inaugurated. Nowhere did he accept his loss, nowhere did he even mention Biden, much less congratulate him. “Our incredible journey is just beginning,” he said—a perfect way to suggest the ongoing nature of the civil war he has created. By keeping anger and uncertainty alive in the minds of many Americans, he has left us in a cold conflict with each other, one that could easily erupt into something hot. Through his disgraceful behavior, he has opened a wound of mistrust and doubt in this country that will be very difficult to close.
The truth is that what his most ardent and deluded followers saw on January 6th was not a shameful mistake, but an unsuccessful first attempt.