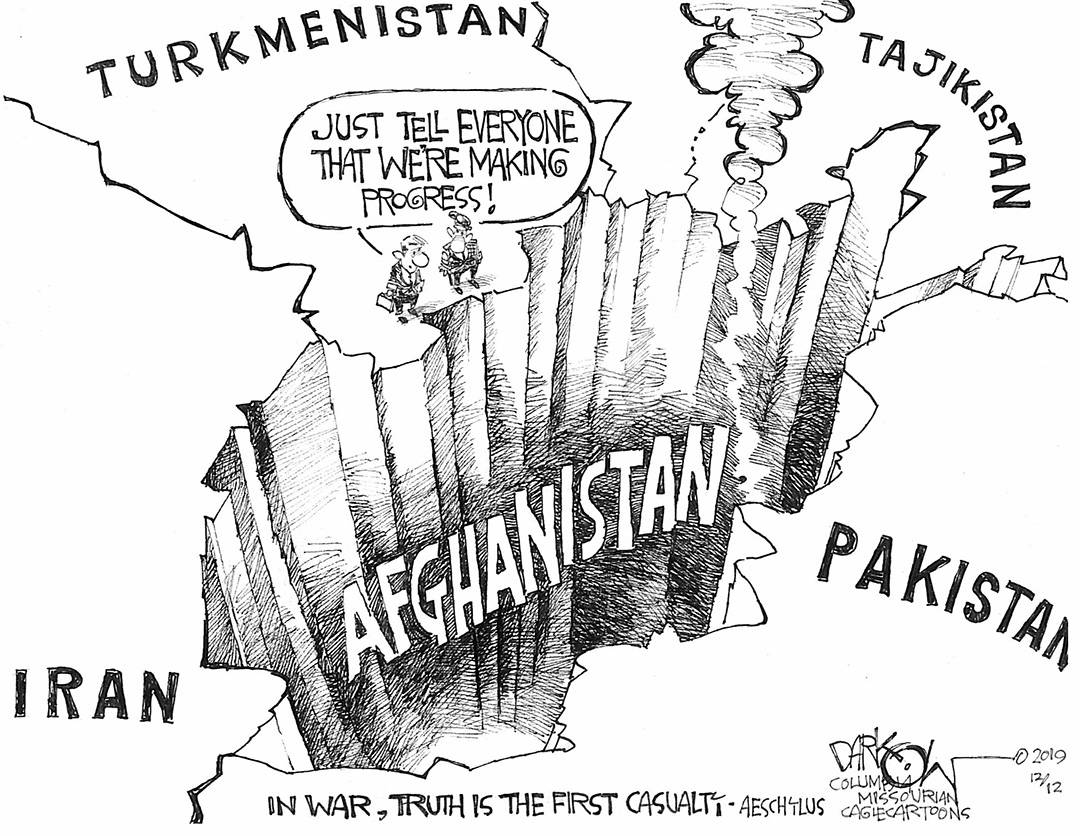 Blame is a dish best served piping hot, and everybody seems to have something to bring to the Afghanistan Withdrawal Pot Luck and Political Lynching.
Generally acknowledged to be as extraordinarily messy as our 20-year sojourn there, America’s final exit from Afghanistan desperately needs a fall guy, a culprit, a perp guilty of the crime. We don’t want to blame a group, large or small, because that doesn’t make as satisfying a meal.
So let’s make it about Joe Biden. Let’s title the indictment, “We absolutely needed to leave, but not in this chaotic way.” After all, the departure was so disorganized, so rushed and panicky—it just wasn’t right. What we should have done is: (you are invited to fill in the blank).
Whatever suggestions you chose, I would submit that you probably missed the inescapable ingredient in this road-apple hoagie.
The truth is: our messy exit was just the logical extension of a massive, 20-year-long institutional failure, on every level of government. The truth is: the heart of the disaster was the absolute refusal of four presidents, our military, our intel and diplomatic agencies, to publicly acknowledge the lethal, self-congratulatory, delusional hubris of believing the puppet Afghan government was real.
To everyone who is now chomping at the bit, saying “But, but, but,” I would ask this question: Which president would have executed a better exit than Biden, once you factor in the shocking speed with which the “Afghan Security Forces” dissolved—or even joined– the Taliban fighters, when the minimum of twelve or eighteen months that experts estimated the Afghan government would last, melted away?
This was the catastrophic miscalculation that made the rout inevitable; it was a long-term, equal opportunity combination of idealism and cynical, calculated political strategizing.
Take Dubya’s approach, for example. In 2007, four years after he essentially ignored the Afghanistan conflict in favor of an even more foolish military adventure in Iraq, he gave a speech in which he said our work in Afghanistan was to “establish a stable, moderate, and democratic state that respects the rights of its citizens.” He said, “…our work is bringing freedom.” Today, such statements about a hugely backward, theocratic collection of warlike tribes are not a case of rose-colored glasses, but more like LSD kicking in.
As did Dubya’s, Obama’s treatment of the Afghan question sidestepped the issue of not just whether the Afghan forces were capable of defending their own government, but whether they even believed there was something to defend. After his troop surge in 201l, followed by a decision to withdraw all U.S. troops by 2014, he settled on leaving about 10,000 troops there. This was presumably not because he had terrific faith in the Afghans’ willingness/ability to defend themselves.
And how about the former “president”? Which of his contradictory, opportunistic statements should we believe? Best answer is “none,” since lying and pandering has always been his MO. Though he insisted in 2017 that we would “fight to win,” by 2019 the self-described brilliant “dealmaker” had inked an agreement with the Taliban that simultaneously shut out the Afghan government (a huge morale-builder for Afghans, absolutely, in case they harbored any shred of confidence in their own government) and freed 5000 terrorists from prison, while the Taliban would forbid any anti-American terrorist activity inside Afghanistan—with zero mechanisms in place to verify that. The former “president” ultimately drew troop levels down to about 3500. Not really perfect conditions for the mid-2021 U.S. withdrawal that was also part of the agreement. Such genius.
So next in line is Biden, who in deciding to actually get out of Afghanistan comes face to face with the fallout from twenty years of group think and delusional policy. There was never a free and democratic Afghanistan. The Afghan Security Forces were, like the government, a creature born of and maintained by American money and little else. What kind of patriotism could we expect in a country where citizens have only the vaguest sense of nationhood? Where leaders are famously corrupt, and the economy relies heavily on the freaking opium poppy? Biden’s determination to face the thankless task of leaving Afghanistan stripped bare all these illusions and made him the sacrificial animal in a dark ritual intended to absolve our previous leaders and their administrations of the guilt arising from willfully blind service to the mirage of a serious Afghan government.
But look on the bright side. If you’re an American who appreciates the gun-toting theocracy that Afghanistan promises to become, there’s a budding example of just such a government right here at home. Where corrupt evangelical leaders flourish, where anybody can carry a concealed weapon anywhere, and government control of women is now just a few short steps from the burka. It’s Texas! Come on down!

After-Ghanistan: Deconstructing the Road-Apple Hoagie
The Republican Partisan Kama Sutra: A Minority Position
The Sacred Bureaucracy Speaks
This Week on “Numb It Down”
And Now, Direct from Mount Sinai: The Constitution!
Like Wine? Bentwhistle Wine Estate is for YOU!
Trump’s Undeclared Civil War
The Crime Must Not Be Sanitized or Forgotten
When the National Commode Backs Up and Overflows
Important Scientific Memo Regarding the Presidential Election
Election Results are Already In: America Lost
The Joys of Disinformation: Local Edition
Retrumplican Senators: Stark Naked and Squirming
Alt-Right Performance Art!
The Preferred Hand Sanitizer of the Chief Infecutive
Our Economic Junkernaut
The “Deep State” is Saving Your Life
The Gettysburg Infomercial
Rocking the Stocks
45 Misses a Big Chance to Shock Us
New and Improved Civicks 101
After the Famous 5th Avenue Shooting