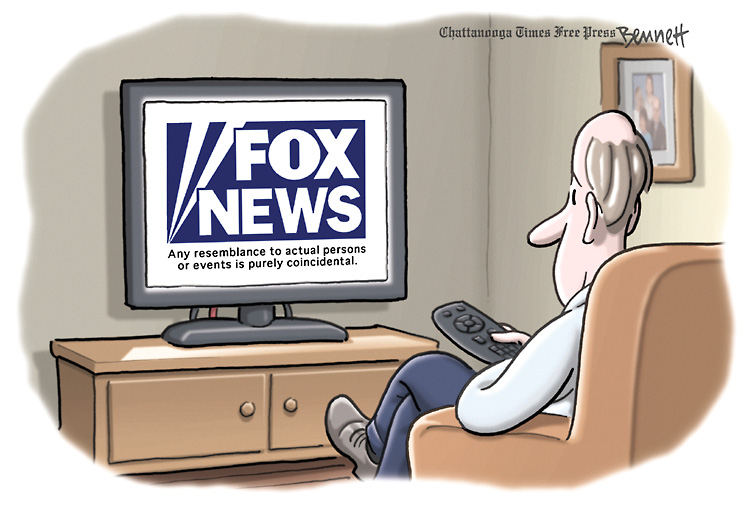 In the spirit of giving back to the community at year’s end, I’d like to offer you my powerful new, patent-bending invention, Fox-O-Matic. This unique system allows anyone to know with reasonable certainty what the Fox News website will be offering each day for the next six months.
Now, if you’re like me, you might say, “Why in God’s name would I want to expose myself to Fox News in any form, considering the risks to my mental health, and the brutal dry cleaning bills I’m in for if any of it gets on my clothes?” I understand this objection, and I empathize. However, it is important to keep in mind the timeless words of the 5th century BC Chinese military strategist, Sun Tzu: “Keep your friends close, and your mendacious, slimy, and seditious enemies closer.” This is to say, you need to know what Fox News is doing for the same reason you want to know exactly where in your garden the semi-feral neighborhood cats are doing their business. Good precautionary measures are always in style, and Fox-O-Matic allows you to take those precautions with minimal effort.
First, two general Fox observations, one that you likely know, one you probably don’t. Number One: If Fox has an editorial policy, it’s institutional distortion. Like a funhouse mirror, but without the fun. Why bother with actual journalism when you can grind that propaganda ax with every word, every headline. Stories might be designated “news” or “opinion” or “analysis,” but rest assured it all comes out of the same toilet bowl. There is rarely a story that doesn’t aim to “own the libs,” unless it’s about Steve Doocy’s recipe for celery root punch, or a NASCAR driver who loves his mother. And these latter “stories” always appear much farther down the page, in what I call “The National Enquirer Latitudes.” More on that in a moment.
Number Two: Fox headlines often don’t have much to do with the actual story that follows. This is because the folks at Fox understand their readers. They know they don’t go in for details, and if the headline is a powerful enough shot of confirmation bias, why should the reader read further? Literacy is such a hassle. And sustained attention to even the craziest detailed reportage takes time away from…whatever they do instead.
There are plenty of examples of this, but one case should explain the situation. The headline says “Watch Biden Push his Own Agenda While Americans Are Hurting.” This was about remarks Biden made at a press conference following the terrible tornadoes that hit Kentucky and other states in mid-December. A reporter asked Biden if he thought the tornadoes were caused by climate change. Biden said that in his view it was certainly possible, but that he would leave it to climate experts at NOAA to answer that definitively.
What a blackguard. Shame on him for pushing his personal agenda.
So what can you expect for other top-of-page headlines? Here are the four reliable topics, expressed in general terms: “Godless Democratic Cities Overrun with Violent Crime and Filth”; “Hordes of Drug-Dealing Rapists and Murderers Trekking through Mexico toward Biden’s ‘Open Border’”; “Corona Virus Variant Runs Rampant Despite Biden Assurances”; Socialist, Free-spending Democrats Will Bankrupt America and Destroy Your Will to Live.”
These are followed by less “important” but no less charmingly warped stories. Note that in criticizing liberals or their allies they never use measured verbs like “disagree” or “dispute” or “differ.” Typical words you see are “slam,” “scorch,” “blast,” “rip”—words with plenty of self-righteous octane to keep oldsters from falling asleep and younger people from losing their tight-lipped, resentful edge. Look for some Greatest Hits like: Everyone is leaving California and moving to red states! CNN’s ratings in the tank! Fauci should be fired! Biden is soft on Russia! Red States are suing the Biden Administration over mandates and masking, while simultaneously blaming him for the spread of new variants.
Still lower down on the page, we arrive at the aforementioned National Enquirer Latitudes, down where Illiteracy Street meets Bad Taste Boulevard. Here you find treasures about Meghan Markle’s money, Kim Kardashian’s wardrobe, middle school teachers having sex with students, and an albino alligator found in a toilet in Orlando, Florida. You will see a 55-year-old “C-list” starlet “rocking” a bikini. You will find out why Callista Gingrich is thankful to be an American (and not necessarily thankful to be Newt’s wife, we assume).
The New York Times, it ain’t. But then that’s the point of Fox-O-Matic: it allows you a quick plunge into Fox’s murky depths without contracting hepatitis A. You can then spend as much time as you like with bonafide media outlets. It’s the best way to keep your traitorous, deluded enemies close without giving yourself loathsome diseases.