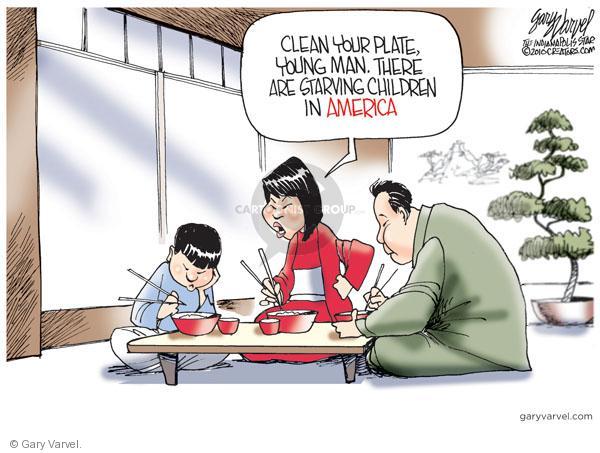 Everybody loves kids, of course, but in our Republican America we recognize the truth: young kids are too frequently used by unscrupulous Democrats as a Trojan horse, trying to sneak the poison of socialism into the life of the nation. First it was just free school lunches, but eventually it’ll be free Pizza Hut, 24/7. Just you watch.
The specious Democrat argument is that it’s up to the government to provide economically-disadvantaged kids with all kinds of benefits, based on the flimsy excuse that their parents are in lower income brackets. Just because income inequality is at its most extreme point since the late 1920s, suddenly parents need government to help level the playing field for them? Total piffle.
This insult to all of America’s affluent rugged individualists is a big part of the Democrats’ scheme to sell the nation on their “Build Back Better” boondoggle that offers all kinds of free stuff to toddlers and people too disadvantaged to matter much to any self-respecting political action committee. Universal pre-k child care? Paid family and medical leave? Sheer wastes of government money. How are those giveaways going to help real Americans, the 10% who own 70% of the value of all stocks? How will they help our magnificent corporations stash more money in off-shore tax havens?
It’s precisely because America has avoided radical communist freebies that we have been able to raise generations of workers haunted enough by the specter of poverty and hunger to make them the most productive on the planet.
Oh, wait. Sorry. This just in: we are actually number six in per capita worker productivity. But those countries finishing above us, like Ireland and Germany, with their free health care systems and subsidized day care, are obviously massaging the numbers, possibly even using actual statistics in their sleazy mathematical voodoo. They’ll stoop to anything. And we do finish ahead of socialist havens like Denmark and France. They’re numbers seven and eight, respectively. Just goes to show you that blind, rabid, anxiety-ridden workaholism can sometimes barely edge out the systems that prioritize a high quality of life. America for the win!
Our Republican priorities yield results on the big scoreboards that really count: the S & P 500 and the Nasdaq. In our world, government financial support rightfully flows to companies that understand the value of stock buybacks and bloated executive salaries; it does not find its way to junk programs like expanded child tax credits–another money pit the Democrats have jammed into their proposed legislation. Why give more money to parents who can’t balance their household budgets to begin with? Are we going to reward incompetence? Those parents should focus on getting that third minimum-wage job so they can pay their own child-care bills, even if they have to put some water in the half-full milk carton in the fridge at home, to stretch the supply a little. Builds character.
It is actually one of America’s great badges of honor, having a child poverty rate among the two or three highest of all industrialized countries, hovering around 17%, just nosed out by Chile and Israel. It’s proof-positive that when it comes to Rugged Individualism, Republicans have got integrity. We don’t just talk the talk, we’re willing to stand unflinchingly by and watch widespread human suffering without giving an inch on our cherished principles. What are 12 or 13 million hungry kids, compared to the righteous beauty of poorly-regulated capitalism pounding its chest and roaring like Jeff Bezos after his sub-orbital vanity project? Sniveling socialists like Denmark and Finland should be ashamed to have child poverty rates below 5%. Bunch of pansies. Enablers.
Worst of all, Democrats plan to pay for their bleeding-heart free lunch by raising the tax rate on the nation’s rank-and-file laborers, average citizens making more than $400,000 a year. These are people so beaten down by taxes that they can barely keep up payments on their pieds a terre in Tuscany or Sardinia! Democrats also want to push the corporate tax rate from 21% to 26%. Obscene. Imagine the deprivations awaiting all those executives. It’s not just offices with endless Maxfield Parrish foam-core posters on the walls, but actual holes in the seats of their Armani suit pants, liquor cabinets filled with cheap bourbon and Mike’s Hard Lemonade. It would be more upsetting, admittedly, if many corporations weren’t able to avoid taxes completely. God bless those accountants and tax lawyers, right?
And God bless a nation where even the most threadbare social safety net is looked on with suspicion, and rapacious business activity is still openly admired. Take a bow, America!

The Way Forward for Napa Supervisor Pedroza
An Open Letter to Representative Mike Thompson
Let’s Get Behind the Congressional Football League
Hoax for the Foax in Napa
No Time to Be Tiptoeing
Pedroza: PR or Probity
Open Mic for Conspiracy Theorists – Napa County Elections
The Power of the Jesus Boost
Pedroza’s Cloud of Smoke
The 2021 Cynnie Nominations Are In!
Introducing: Fox-O-Matic!
E Pluribus Nada
Child Poverty: An American Specialty
After-Ghanistan: Deconstructing the Road-Apple Hoagie
The Republican Partisan Kama Sutra: A Minority Position
The Sacred Bureaucracy Speaks
This Week on “Numb It Down”
And Now, Direct from Mount Sinai: The Constitution!
Like Wine? Bentwhistle Wine Estate is for YOU!
Trump’s Undeclared Civil War
The Crime Must Not Be Sanitized or Forgotten
When the National Commode Backs Up and Overflows
Important Scientific Memo Regarding the Presidential Election
Election Results are Already In: America Lost
The Joys of Disinformation: Local Edition
Retrumplican Senators: Stark Naked and Squirming
Alt-Right Performance Art!
The Preferred Hand Sanitizer of the Chief Infecutive
Our Economic Junkernaut
The “Deep State” is Saving Your Life
The Gettysburg Infomercial
Rocking the Stocks
45 Misses a Big Chance to Shock Us
New and Improved Civicks 101
After the Famous 5th Avenue Shooting