This Week on “Numb It Down” 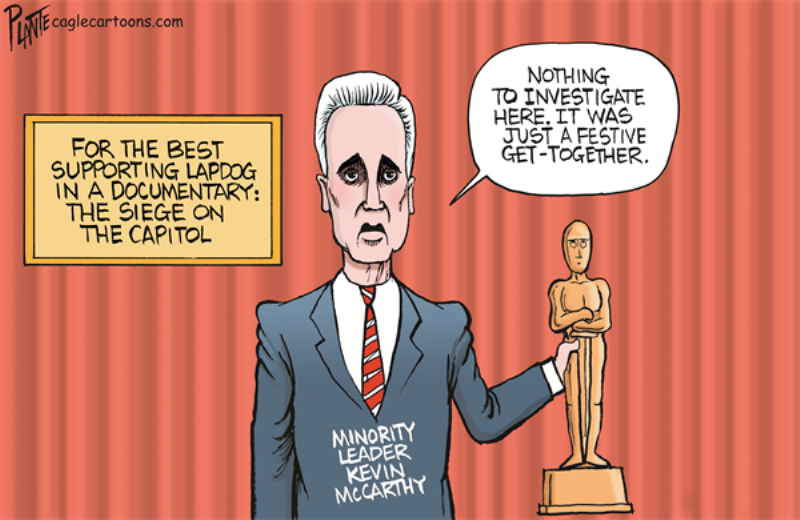 Greetings and welcome to this week’s edition of “Numb It Down,” the show that asks the question, “Can American craziness be supersized and shipped overnight by Amazon Prime?”
We are coming to you, as usual, live from our secure studios, safe from attack by rollicking armed militias now threatening the country with their Confederate battle flags, their buffalo headdresses, their oversized ammo magazines, and their undersized genitalia.
Today’s show is brought to you by Decency and Common Sense, a product with all the baked-in goodness of sanity itself. Combined with your favorite representative government, it provides 100% of the necessary nutrition for a healthy citizenry. On top of that, it’s mmmmm-good, too, with a flavor that says, “I live in the real world,” and “Science is verifiable.” It’s endorsed by everyone who hasn’t allowed their brains to dribble out in a puddle on the floor in front of a television permanently tuned to Fox News.
Today on “Numb It Down,” we take a closer look at the blatant, public self-contradictions of the soi-disant Republican Party. It’s a real ugh-fest. Though we are committed to bringing you the most complete possible view of the topic, if you want more in-depth information, we refer you to youtube, where you’ll find Kevin McCarthy’s excellent TED talk on “Political and Personal Self-Loathing.” It’s a winner. Or rather a loser, in the most successful possible sense.
Contradiction #1: Who can forget that special moment on May 12 of this year, when McCarthy stood before the press and said, “I don’t think anybody is questioning the legitimacy of the presidential election.” Ah, sweet Mystery of Life. How could he have been deliberately overlooking the 25% of all Americans who so erroneously still believe the former “president” was cheated and is the “true president,” more than six months after that election? Or, an even oilier, more shameful contradiction: how could he make that statement when the former “president” himself has not accepted the election’s legitimacy, with over a third of his public statements since April reinforcing his demented and seditious view?
In some ways, an even better/worse example of the contradiction is the ongoing work of the vaunted “Cyber Ninjas,” a company hired by an apparently glue-sniffing Arizona state senate to recount the previously audited recount of Maricopa County ballots, in hopes of detecting bamboo fibers in the paper of some ballots, thus proving there really were 40,000 bogus Biden votes flown in from Southeast Asia. Is the American public expected to accept all this as “normal,” without being administered heavy doses of psychotropic substances?
Contradiction #2: It’s McCarthy again, doing what he does best: talking out of an orifice not normally associated with the spoken word. After publicly announcing on January 13 that the former “president” “bears responsibility” for the shocking January 6 assault on the Capitol, and didn’t call quickly enough for rioters to stand down, McCarthy also expressed openness to an inquiry into the events surrounding the attack. A few short weeks later, he began a less-than-elegant pirouette away from that stance. While the public may have sustained serious whiplash injuries from his performance, he seemed serene with his new conclusion: the former “president” had acted appropriately. No inquiry or commission was necessary. In fact, it would just be a waste of time, a useless exercise in quibbling about the past, when what was needed was a turn toward the future and—you know, something else. Anything else.
It took McCarthy only one visit to Mar-a-Elba in late January to understand the need for this one-eighty. Was it a slice of the resort’s famous chocolate cake that made the difference? Maybe the great selection in his suite’s mini-bar? A 19th hole lap dance? Or could it have been poll numbers suggesting that should he not change course, the great unwashed masses of the former “president’s” internet mob would clamor for his hanging, as they did with Mike Pence?
Whatever the reason, McCarthy sucker punched himself again with the contradiction: How can the Retrumplican party, in his own words, “be united in looking, moving forward” when its leader is obsessed with an election lost six months ago? When, as we mentioned, 25% of Americans believe, falsely, that the election was fraudulent? How to move ahead when 15% of Americans, virtually all in McCarthy’s party, believe QAnon’s bedrock notion that America is ruled by a cabal of Satan-worshipping pedophiles?
A suggestion from us here at “Numb It Down”: the humane way to deal with these contradictions in McCarthy and his cohorts would be to run saturation advertising on Fox and Newsmaxx, touting mental health. The focus would be a 30-second spot at the end of which we hear the voiceover: “Ask your doctor if a lobotomy is right for you.”