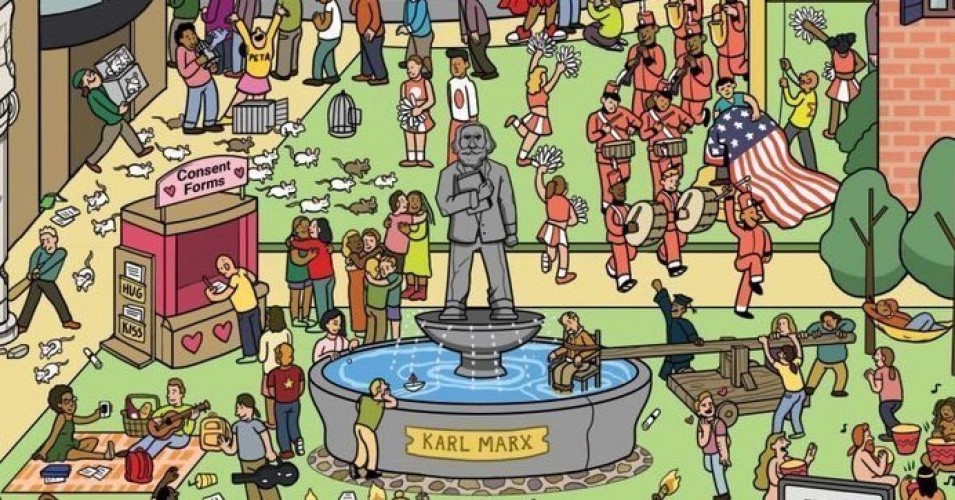 Hello. I’m Paul Moser, Professor Emeritus of Confabulation Studies here at the American Academy of Junk Science, in Porcine, Indiana. I am writing today for a very serious and specific purpose, which is to assure you of something. Anything. God knows, the world just seems completely upside down at this point, after an election that doesn’t seem to want to yield the proper results, and a pandemic that once again appears to be out of control.
In the midst of it all, at least we can say: Thank God for our “president.” Sporting his new hair color, a distinguished-looking Lady Gaga silver-blond, he is displaying his usual take-charge approach–to his own problems, if not America’s.
As the number of COVID infections rose steeply over the last two weeks, he leapt into action, tweeting repeatedly that the presidential election had been “rigged” and “stolen.” He had no actual proof that he had been cheated, but his insistent tweets were in all-caps, which, along with a spittle-flecked, zany tirade from Rudy Giuliani, was all the proof his legally-blind acolytes required.
Now it might seem to you that to help him find voter fraud or massive irregularities in pivotal states might be an impossible task for us, especially when the cybersecurity people at the Department of Homeland Security have publicly pronounced the elections “the most secure in American history;” not to mention that the Associated Press, along with every other major media outlet, has declared Joseph R. Biden, Jr. the winner. But I want you to know that I have been in touch recently with a nice young man in the West Wing, one who has not yet been fired for disloyalty, and reassured him that I have calculated the formula that unearths the fiendish Democratic plot that allowed dead Islamic terrorists, PETA officials, and Looney Tunes cartoon characters to submit upwards of one thousand ballots each, in multiple states and in Peru, while at the same time hiding many votes for the “president,” thus depriving him of his rightful victory.
Please note that we ourselves are without detectable bias, unless you happen to be very strong at detection. Naturally, we are aware of the urgent need of our “president” to protect his brand and avoid being labeled a “loser,” which would require him henceforth to wear the big red “L” on his lapel, like Hester Prynne. We also understand that his personal needs far exceed in importance whatever oaths he might have sworn in connection with the office of President of the United States. All that “protect-and-defend-the-Constitution” stuff could hardly merit higher priority that protecting and defending the “president” and his righteously legendary sense of self. If he needs to undercut the reliability of the nation’s electoral system in pursuit of that worthy goal, it is up to him. The “president” has the constitutional right to try to cripple or even destroy our system of government if he’s having a bad day, or perhaps did not get pickles on his Double Bacon Quarter Pounder with Cheese.
As scientists we also want to be clear that no pressure from any political figure or group has affected our findings, in contrast to those poor buggers at the CDC, who have needed extensive chiropractic work to restore their spinal alignment after severe elbow checking from the Executive Branch.
So, those stolen ballots, what happened to them?
Without divulging proprietary methods known only to the Star Chamber here at the Academy, here is the explanation of just how the “president’s” vote totals fell short in Arizona and Pennsylvania:
Only about 14,000 stolen Trump votes are needed for a convincing victory in Arizona, and nearly 10,000 of those can be found exactly where Meghan McCain put them: stuffed into the cushions of the stunning new sectional in her Los Angeles apartment. The other 4,144 Trump votes are in a storage locker in Mesa, AZ, rented by Jeff Flake. They have been jammed into the hollow spaces in his wife’s priceless Hello Kitty ceramic collection.
Pennsylvania is a steeper climb, but we managed to locate the needed 60,000 Trump ballots. The lion’s share—51,558 were being used to wrap cheese steaks at Angelo’s King of Steak on the South Side of Philadelphia. A few hundred were lost to damage from grease and a truly delectable cheese sauce, but most were salvaged. The balance were being used as place mats at the Dirty Grind Coffee Shop in Pittsburgh, but were saved by a savvy patron on whose speed dial we figure prominently.
We have provided all this electrifying information to the “president,” reminding him that this victory comes with a bonus: he will not yet need to pardon himself for crimes committed when he was just a rapacious, bullying, small-minded private citizen. Huzzah!

Introducing: Fox-O-Matic!
E Pluribus Nada
Child Poverty: An American Specialty
After-Ghanistan: Deconstructing the Road-Apple Hoagie
The Republican Partisan Kama Sutra: A Minority Position
The Sacred Bureaucracy Speaks
This Week on “Numb It Down”
And Now, Direct from Mount Sinai: The Constitution!
Like Wine? Bentwhistle Wine Estate is for YOU!
Trump’s Undeclared Civil War
The Crime Must Not Be Sanitized or Forgotten
When the National Commode Backs Up and Overflows
Important Scientific Memo Regarding the Presidential Election
Election Results are Already In: America Lost
The Joys of Disinformation: Local Edition
Retrumplican Senators: Stark Naked and Squirming
Alt-Right Performance Art!
The Preferred Hand Sanitizer of the Chief Infecutive
Our Economic Junkernaut
The “Deep State” is Saving Your Life
The Gettysburg Infomercial
Rocking the Stocks
45 Misses a Big Chance to Shock Us
New and Improved Civicks 101
After the Famous 5th Avenue Shooting