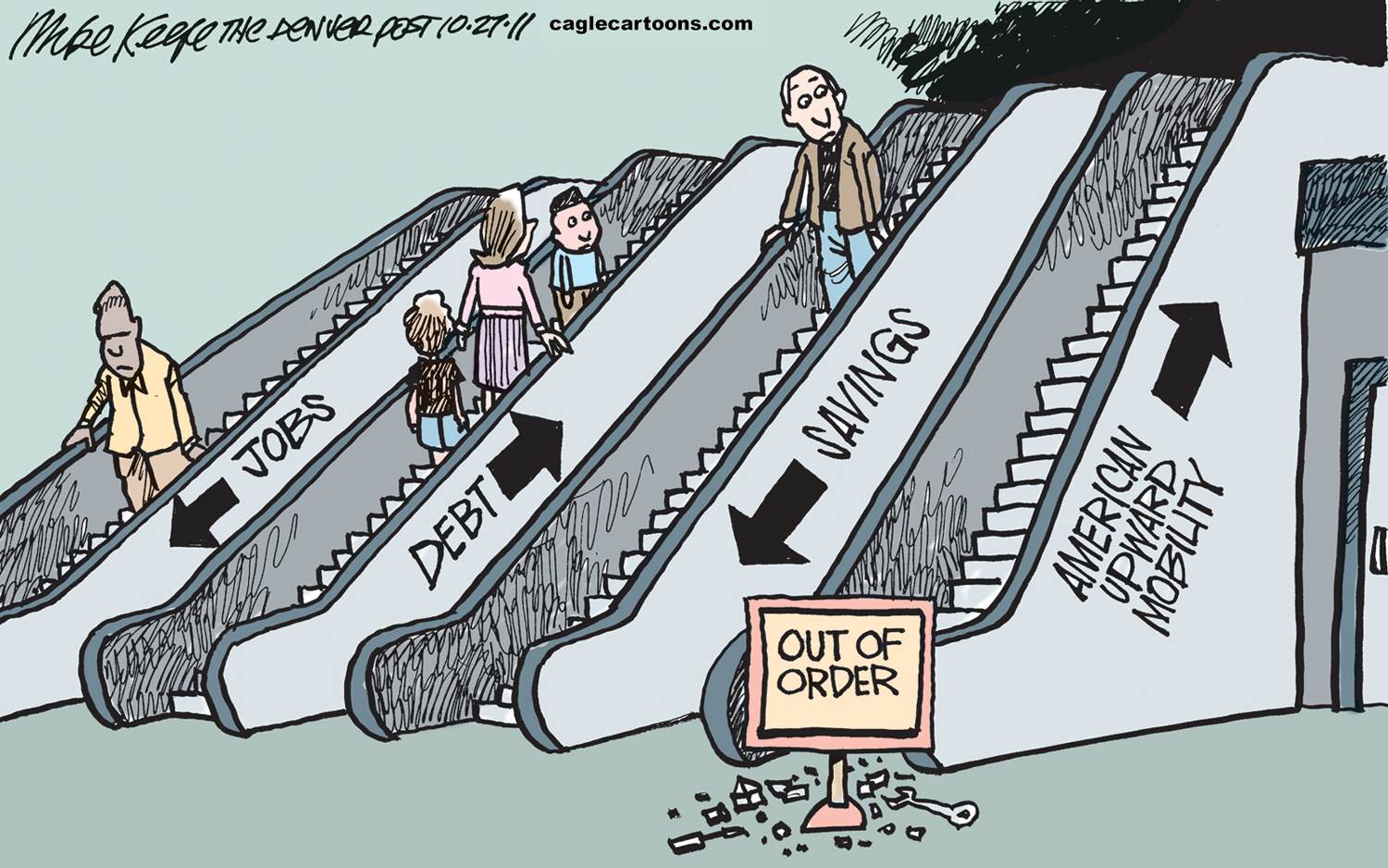 The COVID-19 crisis has served to lay bare an important reality: our hyped-up, amazing economy is as thin as Mike Pence’s smile. But how could that be? Over the past few years we have been relentlessly carpet-bombed with the great economic news. Sky-high stock market! Record low unemployment! Amazing corporate earnings!
Well. As Warren Buffet famously said: Only when the tide goes out do you discover who has been swimming naked. He was referring to individuals whose poorly-selected stock portfolios go into the tank when the economy gets rough, but it’s appropriate to apply to all Americans and our net worth in 2020. Nobody here but us nudists.
We are forced now to fully confront the terrible implications of America’s staggering wealth inequality and the Incredible Shrinking Middle Class. You have likely read mind-numbing statistics on the subject already, so I won’t further anesthetize anybody with a ton of numbers; I generally prefer leaving the necessary anesthesia to professionals like vodka, gin, and their friends, anyway. Instead I’ll offer some bullet points that quantify the plight of the chronically sub-rich, and a couple of additional facts that make this virus crisis so much more financially devastating than we originally thought.
The headline is the lack of savings among average Americans. Depending on the data source, somewhere between 60 and 70% have less than $1000 in savings, and 30% have saved nothing at all. So no one could have been too surprised when COVID-19 brought the commercial world to an effective standstill and the financial cushion that experts thought would see average American workers through a couple of months of hardship turned out to be the rock of no money and the hard place of no work.
How could it get worse? You might want to refresh your anesthesia and soda before looking at the broader picture: not only do the vast majority of Americans have little or no savings, just about the only thing they DO have is a lot of debt.
U.S. consumer debt in 2019 stood at around $4 trillion, up nearly 5% from 2018. That makes a $12,000 debtor out of every man, woman, and child. And though most of this debt consists of mortgages, student loans, etc., it is disheartening to see that credit card debt makes up more than $860 billion of that total. Those interest rates’ll eat you up faster that you can say “eviction notice.”
But the last point, concerning the virus’s economic effects, is the most daunting of all. It’s right in front of us, but something that few public figures have wanted to acknowledge in all its implications. It is this: We have never seen this virus before. We haven’t the remotest idea how long this pandemic will take to play out. CDC experts offer some educated guesses about our future with the virus, but nothing is certain. Dr. Anthony Fauci himself repeatedly stresses that we are constantly gathering new data about the virus and its pathology, but that many of its characteristics are still hazy. Who knows how they will express themselves over time, loose in human populations?
Is the graph of our economic recovery going to look like the desired “V,”—a rapid descent and an equally rapid rise? Certainly not. Will it be a “U,” with a longer shutdown prior to recovery? Or a “W,” with a “second wave” of viral severity leading to a second shutdown? For all we know, recovery could look like the jagged EKG of a rabid squirrel, or the jittery Sharpie signature of our “president.”
The reason you’re seeing demonstrators in various states, demanding that businesses open up again—hell or high water–is not that they’re collections of angry, highly-skilled epidemiologists who see flaws in the science of a long shutdown and who decided to express themselves with a little get-together on the steps of the state capitol. You’re seeing workers fearful enough to reject the idea that scientists should lead the way out of this mess. And the fear and anger that workers feel is directly related to the debt they carry. You can bet we would see a lot more patriotic patience in waiting out the stages of re-opening if people were not running on financial fumes. So should we be more angry with scientists, then, or with ourselves, for electing the current “administration” which has ignored the need for a $15 minimum wage, serious health care reform, and greater support for small startup businesses, while instead enacting the 2017 tax bill, which gave large corporations a permanent 15% cut and tossed a crumb to the middle class, amounting to an average tax reduction of $500-600/year—until 2025, when it is set to expire?
No point in just getting mad—why not get even? November is coming.