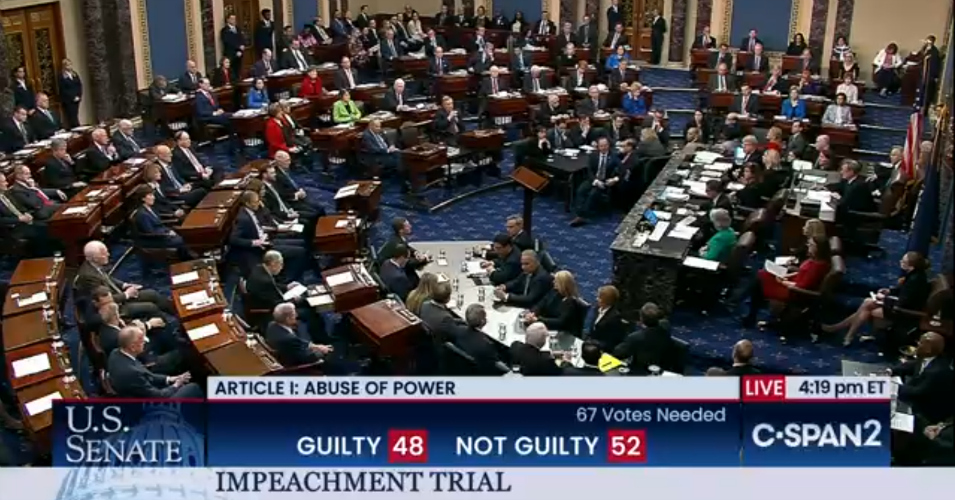 Exhausted and confused, the Republican Party staggers toward the finish line: the 2020 elections. It’s a shame that so few among them have been able to admit that the party no longer exists. Invaded by the Orange Virus, it has been cannibalized from the inside to the point that little remains beyond faux-evangelical white supremacist conspiracy theories; meanwhile its leaders have been busy with the million and one details involved in selling their souls. You wouldn’t think it would be such a hassle to get rid of a few hundred souls, even if they weren’t of the highest quality; but—long story short–they did finally get Home Depot to buy them up as an active ingredient in their house brand of weed killer.
Thus liberated to be the kind of principle-free, gutless toadies that the “president” made it clear he prefers, the Retrumplican leaders have spent the last few years casting votes and engaging in debate that would have embarrassed and shamed just about anyone. Anyone with a soul, that is. During those years, they came perilously close to going full Benedict Arnold on us, but in the end pulled back to the more modest position of simply violating their Constitutional oaths.
Now you musn’t confuse these people with Republican senators from the old days, when things weren’t quite so dire, when you could describe the actions of Republican senators with more innocent adjectives. Mitch McConnell’s 10-month-long refusal to allow a vote on Obama’s SCOTUS nominee was certainly repulsive, illegitimate, and sinister, while, say, Ted Cruz’s famous 2013 Senate floor reading of a Doctor Seuss classic, for no productive reason other than to make himself a marquee attraction on C-SPAN 2 might be described as “idiotic”; and James Inhofe’s immortal introduction of a snowball into the Senate chamber in 2015, to display his command of climate science, would best be labeled “brainless and ignorant.” But these were mere light entertainment when compared to recent Republican debasement of the Senate’s role in government and its standing in the world.
Whether you call them the “Crème de la Crud,” the “World’s Greatest Degenerative Body,” or just simply “a proctological wonderland,” our current Retrumplican senate is hard to beat for sheer cynicism, fecklessness, and craven lack of conscience. Even to say the word “conscience” in the senate chamber is now an embarrassment—kind of like hearing the word “holiness” in a brothel.
The Big Sellout, of course, took place on February 5th of this year, when the senate found the “president” not guilty on all counts brought against him in the now famous impeachment trial. Only one lone actual Republican, Mitt Romney, found the president guilty on one of the two articles of impeachment. When a Wall Street private equity mogul is the hero of your story, you know you’re in trouble.
The others, the Retrumplican senators, voted to avoid hearing first hand testimony from ex-National Security Advisor John Bolton, obviously fearing that his story might strip them of the already paper-thin pretext of “lack of evidence” that they clung to so desperately. No more evidence, please! More of that stuff might easily lead to a conviction! Can’t have that, can we? Interestingly, it’s a foreshadowing of Trump’s famous remark about virus testing: “Slow down the testing, please!” If you are foolish enough to do more tests, you’re going to find more infections—and who wants that?
Sidebar: Yes, that was your “president” speaking. He was indeed saying something so stupid that it would make even a middle school student laugh.
But consider what Retrumplican senators did through those impeachment votes. Those votes were uglier than any of their subsequent shame-faced dodging of questions from the press when, for example, the “president” refused the idea of re-naming military bases bearing names of Confederate officers, or when he offered best wishes to pedophile enabler Ghislaine Maxwell, or suggested the 2020 election be postponed. Those votes to acquit, if framed by the famous story of “The Emperor’s New Clothes,” identify the Retrumplican senators not just as people who stood by in the crowd and applauded the naked emperor as he passed by, but as people who took off their own clothes, not because of their convictions or their principles or—God know—their integrity, but to placate this naked emperor and save their jobs. They know they are naked and that they should be ashamed. If they are not, it is only because by now they are accustomed to engaging in near-constant delusional rationalization. Insert barf emoji here.
As Jeff Flake, ex-senator from Arizona, warned Republican legislators more than once: “You can go elsewhere for a job, but you cannot go elsewhere for a soul.” In November, many of these leaders will be left without either one.

Important Scientific Memo Regarding the Presidential Election
Election Results are Already In: America Lost
The Joys of Disinformation: Local Edition
Retrumplican Senators: Stark Naked and Squirming
Alt-Right Performance Art!
The Preferred Hand Sanitizer of the Chief Infecutive
Our Economic Junkernaut
The “Deep State” is Saving Your Life
The Gettysburg Infomercial
Rocking the Stocks
45 Misses a Big Chance to Shock Us
New and Improved Civicks 101
After the Famous 5th Avenue Shooting