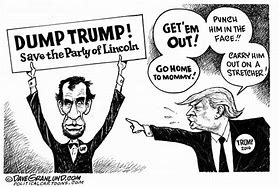 Twelve score and four years ago, our fathers brought forth on this continent a new nation, a really beautiful, incredible new nation, conceived in Liberty (when you’re famous, she’ll let you grab her anywhere, I can tell you) and dedicated to the proposition that when somebody is the president of the United States, the authority is total, and that’s the way it’s got to be.
Now we are engaged in a great big fantastic propaganda war, testing whether this administration or any administration so ill-conceived and poorly dedicated, can endure by concealing its collective mental illness. On the battlefield known as the James Brady Press Room, we are met in an attempt to look somewhat more than totally incompetent in a major public health crisis. We have come to watch various officials dedicate themselves to my powerful obsession with my public image, which eclipses in importance even the health and welfare of the citizenry. They come to dedicate a portion of that battlefield as a final resting place for truth and decency, that I might remain in office and have the brass to rate my own performance as a “10.” It is altogether fitting and proper that they should do this—even the esteemed Doctor Fauci, who will stay in line unless he wants his head handed to him on a platter. The lickspittles and soulless toadies who surround me never forget their obligation to vainly attempt to provide me with a legitimacy that I each day seem more determined to shed.
But, in a larger sense, we cannot dedicate—we cannot consecrate—we cannot hallow—this ground. The brave press secretaries, at once living and brain dead, who struggled here, have consecrated it almost as much as the tacky 2-hour infomercials that for the moment must suffice as replacements for the Red Meat Nuremberg Rallies that were so big with my base until this silly, inconvenient virus thing came along.
The world had damn well better note and long remember the fabulous, really incredible things I have said and done here, because without me you people wouldn’t even have a country. It is for my tight-knit team of suck-ups and bootlickers to dedicate themselves to the great task before us—to squeeze the last ounce of self-respect and misplaced loyalty from their own wretched husks, to take increased devotion to that cause worthy of their last full measure of devotion: me. I now highly resolve that these expendables shall not have destroyed their lives and reputations in vain, and that this nation, under me, shall have a new birth of stupidity, and that government of the people, by the people, for the people, won’t be, like, something anyone will miss too much as it perishes from the earth.
And by the way: Make sure my name is on all the checks that go out to war widows. And I DON’T want to hear details about whether I am authorized to sign the checks or not. Got it?