And Now, Direct from Mount Sinai: The Constitution! 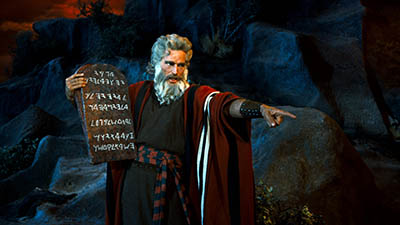 Just to re-cap: we’ve been following around a bunch of guys in powdered wigs for two hundred and thirty-odd years, across the desert of history, swept along by our mutual respect for the system of government they created, i.e., the Constitution.
We know all about this. Or at least we think we do. But there are two aspects of the Founders we definitely don’t pay enough attention to: one is the fact that these guys were pragmatists. They loved the elegance of ideological theory, sure, but were very aware also that half-a-loaf was quantumly more nourishing than, say, nothing at all. Secondly, they were not absolutists, believing that they had all the answers, for everyone, for all time. They didn’t pretend to be prophets and seers.
This second point is especially important these days, when the more obnoxious and brazen strain of American politician runs around waving a copy of the Constitution, speaking in reverent, hushed tones about “The Founders”—the way a health-food nut talks about kale. The truth is, many Americans have drifted from thoughtful, rational loyalty to the principles of the Constitution, to considering it somehow sacred and untouchable in all its parts. The Constitution as America’s Ten Commandments—or even as our Golden Calf, calling us to worship.
This is not just garbage, but dangerous garbage.
If the Founders had pretended to be creating an immutable system for all time, one for which every bit of fine tuning had already been done, there would be no “Amendments to the Constitution,” no Supreme Court to interpret its various aspects. There would be no mechanisms to allow the Law of the Land to adapt to stunning changes in the world, changes so drastic and unforeseeable that a rigid form of government would surely shatter under their weight.
We are now living through just such momentous changes. We are confronting issues of justice, equality, and the common good, issues of such scale and importance that to ignore them is to threaten the heart of the Founders’ creation. Here are two areas where change is so overdue that it’s become actually anti-American, if not criminal.
First, the D.C. statehood issue. With a population over 700,000–larger than those of Vermont and Wyoming–what possible arguments can be lodged against it becoming a state? Of course: It’s not in the Constitution. Well, that settles that. The Founders knew all along that D.C would become a huge metro area, but decided its citizens should pay taxes but never have voting representation in Congress. Sure.
The only arguments you hear against D.C. statehood are political. Republicans can’t stomach the idea, since most D.C. voters are Democrats. Because a large plurality is also African-American, it is not a stretch to include racism as a possible motive, too, but the issue of fairness and justice is primary, regardless. No Republican wants to talk about taxation without representation, except the Fox News commentator who suggests that D.C. remain without representation, but that residents be free from paying anything to the IRS. Brilliant. Since your waiter brought you a plate with no food on it, you won’t be asked to pay anything.
Then there’s the Second Amendment, and the gut-wrenching issues surrounding gun violence. This long-running, heated controversy would be boring if it didn’t involve so much unnecessary loss of life, and didn’t reflect so shamefully on our nation. America now hardly blinks at the existence within our borders of more guns than people, and shrugs when it sees shockingly frequent mass shootings. Can’t we enact even rudimentary fixes to rein in our gun sickness?
Nope. Sorry, say gun apologists. It’s about the Constitution. We can accessorize our cars with guns, use them as nut-crackers, decorate the Christmas tree with them, make them godparents of our children. We know our rights!
Citizens who object will often get a sneering response from the “expert:” “How dare you question my right to defend myself with my twenty semi-automatic assault-style firearms? I’ll bet you don’t even know how to field-strip an AK-47! (Snort)”
It’s a twisted reality that ignores decency, common sense and public safety. It is not mentioned often enough that in the Founders’ world, a firearm could be loaded, aimed, and discharged perhaps three times a minute. Those who own modern weapons can easily fire forty or fifty rounds in that same minute. So would the Founders still endorse the amendment, knowing that today’s “well ordered militias,” thuggish mobs like the Proud Boys and The Three Percenters—as well as deranged, lone-wolf shooters–are capable of such destruction?
Of course not. But until the public makes more noise, our fossilized Constitution, our Golden Calf, will remain pretty good cheap camouflage for blind stupidity.