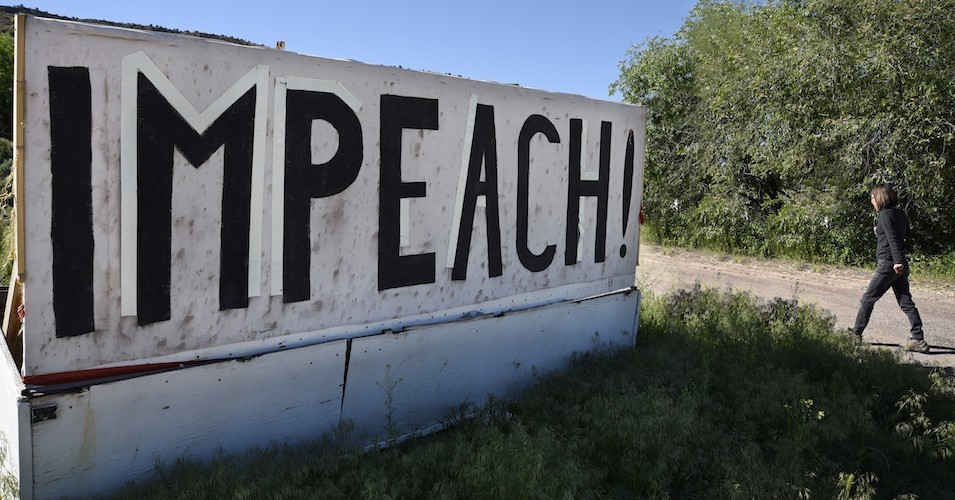 There are a few good arguments against moving to impeach Trump.
None of them have to do with his being innocent.
One argument is that the public is tired. They don’t want to consider the ins and outs of the case, especially after Trump’s Attorney General and Personal Bag Man, William Barr, contrived to pre-empt and misrepresent the Mueller Report with his infamous “summary,” stating falsely that Trump had been exonerated on both conspiracy and obstruction of justice charges. By his design, more than three weeks would pass before the actual report was released, giving Trump and Barr plenty of time to convince the public that there was nothing more to see, just some boring legal language, infinitely less interesting than our Facebook pages.
A second argument is that Democratic leaders do not want to risk alienating voters in districts that Trump carried in 2016 but that elected Democrats to the House in 2018. A House roll-call vote for impeachment, so the argument goes, would potentially risk those seats.
The third and supposedly definitive reason is the logical if depressing fact that the invertebrate Republican-dominated Senate will never convict him, even if the House sends them compelling Articles of Impeachment. So the possibility of removing Trump from office—something he richly deserves–is pretty much nil.
So does that end the discussion? Absolutely not.
Even considering the poor odds for conviction, there are two reasons why an impeachment inquiry is absolutely necessary, and damn the torpedoes.
First: Trump is guilty. It is true that though members of his team had more than 100 contacts with Russian nationals in the course of the campaign and transition (something that has NO parallel in presidential campaign history), it turned out that the very high bar set by law in cases of alleged conspiracy was, according to Mueller, not met.
There might be some dispute about that first charge, but absolutely none about the second: Trump obstructed justice.
Not only did he obstruct justice while the Mueller investigation was ongoing, but he continues to do so RIGHT NOW. He has actively encouraged key potential witnesses in House committee hearings to defy subpoenas, and is locked in a court battle to prevent his ex-White House Counsel, Don McGahn, from testifying. You know he is serious about scotching that event, knowing as he does that McGahn will testify that Trump ordered him to fire Mueller. There are nine other instances that rise to proof of obstruction, but those who are already paying attention are familiar with many of them, and those who really need to hear the message have already decided not to listen. People with poor personal hygiene never pay attention to the bath soap commercials.
To further obstruct the investigation in the minds of the public, Trump has tweeted the phrase “witch hunt” over two hundred times since March of 2017, along with a smattering of references to “18 angry Democrats” who were conducting the investigation. It is especially noteworthy that Mueller is a registered Republican.
Does that stuff look ominous to anyone at all? You might have heard the infamous quote: “If you tell a big enough lie, and tell it frequently enough, it will be believed.” It is sometimes attributed to Joseph Goebbels or to Lenin, or to Hitler himself, but however you slice it, in our day and age, Trump owns it. Think of his repeated insistence that Obama was not born in the U.S. There is a long, ugly list of these mad, monotonous claims.
The second reason to deliver Articles of Impeachment is every bit as important as the fact of Trump’s guilt: we desperately need to avoid setting a terrible precedent for future presidents. We need to awaken to the monstrous danger of remaining silent, stunned and inert in the rubble of Trump’s blitz of lying tweets, distortions, and grotesque, malign bluster; that silence is the equivalent of endorsing his brazen abuse of power. If Trump can use the powers of the office of President to protect himself personally, to thwart legal mechanisms that undergird our system of government, then, by precedent, presidents will be considered above the law, and will no longer have to “protect and defend the Constitution of the United States” as urgently as they protect themselves.
If it turns out that there is no Impeachment Inquiry, if the House gets lost in careful calibration of its options and the Senate rolls over and continues its partisan slumber, if much of the general public cannot or will not recognize the danger that is right in front of us, then so be it. The price to be paid by us and by future Americans is likely to be steep.